Click on the “News” tab above to see how Service Engineering contributes to the Covid-19 relief efforts. 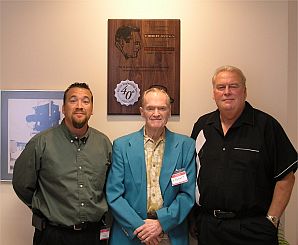 Service Engineering, Inc. was founded in 1967 by the late F. Robert Jennings (1922-2010). In the 1950’s, F. Robert invented and built the first ever outside tooled feeder bowl in response to the demand for faster feed rates, multiple lines of feed, and the ability to automate the feeding of larger parts. Outside tooled feeder bowls helped revolutionize the parts handling industry; resulting in the founding of Service Engineering, Inc.
In 1982, his son, Bob, was elected President of the Company followed by Bob’s purchase of the company in 1986. Throughout the next 20 years, Bob led the company, by example, to tremendous growth and also to the new location in Greenfield, Indiana. When asked what his secret to success was, Bob was very quick to credit the team of people that he built around him.
In 2007, a third generation of Jennings began to lead the business. Having worked in almost every department within the company since 1990, Ryan Jennings became the President of Service Engineering in 2007. Since that time, Service Engineering has continued to steadily grow and strengthen its operations.
In 2018, Ryan purchased Service Engineering from his father completing a very well planned transition to the third generation. One of the most difficult transitions to make in a family owned business. Ryan focuses on the people, the process, and the product. He remains passionate about ensuring that everyone’s relationship with Service Engineering results in success. “Customer’s pay us to be the best in the industry and we pay the best in the industry so we have the highest expectations and standards in the feeder bowl industry”, Ryan states. “It’s really pretty simple, associate yourself with like-minded people who care about each other, always maintain your integrity, and be willing to work the hardest.”
Service Engineering continues to train people into the industry at an unmatched pace. Ryan states that no other feeder company has trained more people into the industry than Service Engineering and that makes him very proud. “We have a responsibility to our customers and our employees to ensure growth and success for years to come and that is a responsibility that I have always welcomed.”